Chief Minister Pramod Sawant unloaded a potent bombshell when he said earlier this week that henceforth, all government recruitment will be done through the Staff Selection Commission. It in effect means ministers and MLAs will no longer have the power to dole out government jobs, a vote-catching weapon Goa’s politicians for decades have been flaunting. It also has the potential of ridding the recruitment process of corruption and making the cash-for-jobs scams so often exposed in Goa a history. But will Sawant follow through or will it be yet another case of “better said than done”? The Goan dives into the issue and learns that it clearly will be an uphill task for the Chief Minister to rise above politics and walk his talk. 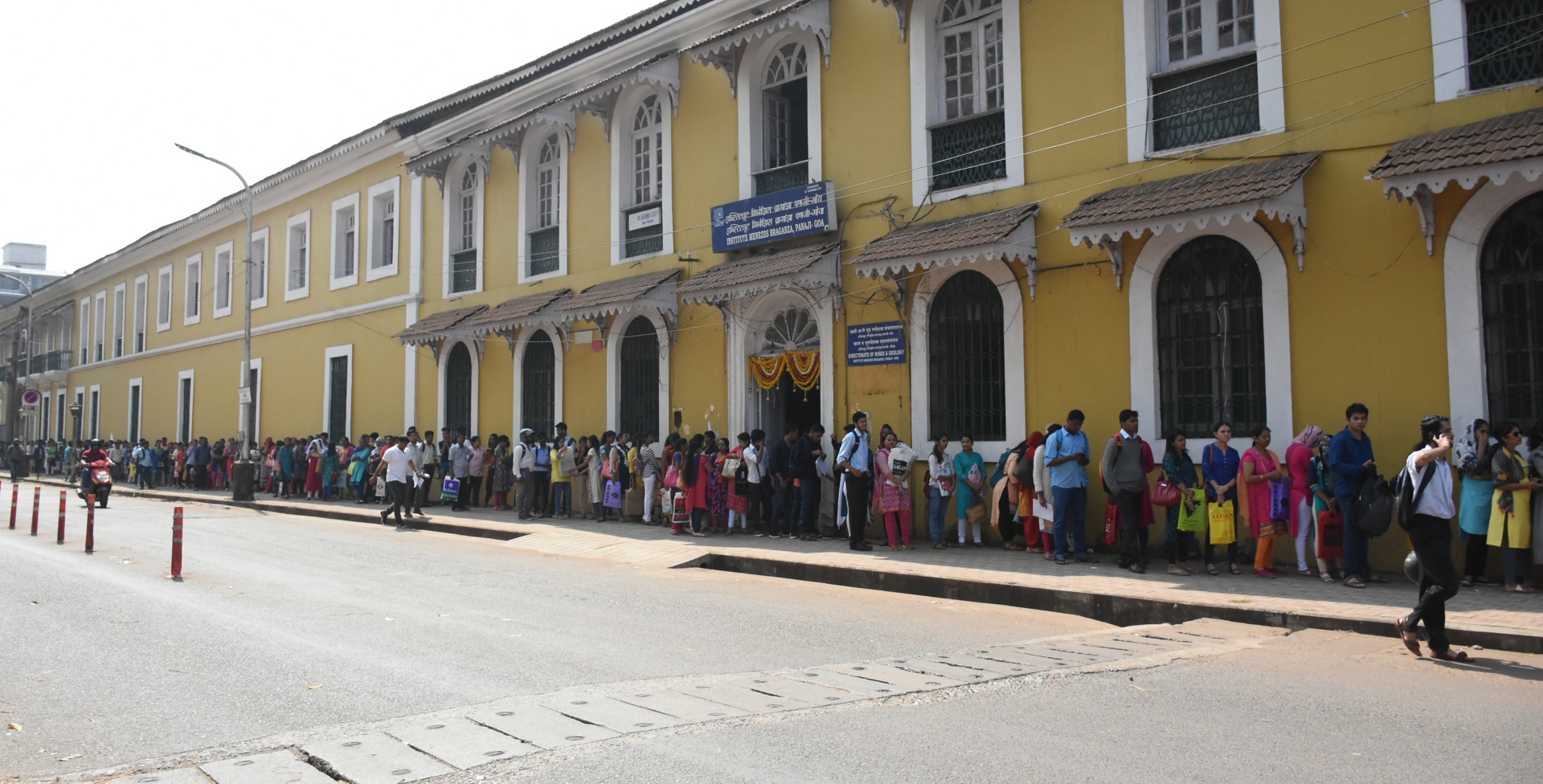 Politicians, political parties and civil society in general alleging corruption, nepotism and scams in recruitment to government jobs is not uncommon in Goa. Massive recruitment by the government in the run-up to the 2022 assembly elections triggered such allegations, particularly when the intake of over a thousand employees in the Goa Medical College and the Directorate of Health Services revealed that over 80 per cent of the positions were grabbed by candidates hailing from the twin constituencies of Sattari — Valpoi and Poriem. Health Minister Vishwajit Rane represented Valpoi and his father and former chief minister Pratapsing Rane represented Poriem.

Rane was accused of using the GMC and DHS recruitment as a jobs-for-votes tactic. He wasn’t the only minister under a cloud. Then PWD Minister Deepak Pauskar was another. Recruitment of junior engineers came under the scanner and the allegations of cash-for-jobs were so serious that when it came up for scrutiny before the High Court, the government threw in the towel and scrapped the appointments and the entire process.

For the common citizen and aspiring youth, a government job is coveted, and tagging on to a politician in power to land one is the generally adopted shortcut and a given. A politician, on the other hand, has used it as an effective tool to gain electoral success.

So, earlier this week on Tuesday, everyone was surprised when Chief Minister Pramod Sawant, while inaugurating the ‘Mega Job Fair’ in Taleigao, said: “MLAs and Ministers can’t give jobs. It was the wrong concept in Goa as of now. Candidates used to go to MLAs’ homes (to seek government jobs), but henceforth, those who want a job should apply directly to the Staff Selection Commission.”

He also said that 100 per cent of recruitment in government will be done by the Staff Selection Commission, and only those who perform best at competitive exams will be selected.

The issue of corruption and nepotism in government recruitment is not exclusively a recent phenomenon but is as old as the State itself. Over the decades, since Goa attained statehood in 1987, it has had a fair share of controversy over government recruitment. Allegations of a job-for-votes or cash-for-jobs scam have abounded from almost every political corner and civil society each time the government has recruited.

The chorus against corruption in recruitment got particularly loud in the run-up to the 2012 general elections when multiple ministers in the then Digambar Kamat-led government were accused of interference in the recruitment processes of departments they presided over. It was then that the idea of setting up a Staff Selection Commission to conduct all recruitment processes for non-executive posts was mooted by the late Manohar Parrikar, who was the Leader of the Opposition then.

The Parrikar-led BJP won the 2012 polls and he became Chief Minister again. But between then and late 2014, when he was elevated to Union Defence Minister, he did little if anything to establish the Commission. His successor, Laxmikant Parsekar, did pursue the move but faced tremendous opposition from within his cabinet and party.

Parsekar’s strong stance against political interference and patronage in government recruitment at the time was one of the reasons his electoral downfall was attributed to in 2017 when Parrikar returned to the State as Chief Minister once again.

Meanwhile, Parrikar again failed to act on his idea of setting up the Staff Selection Commission in his post-2017 tenure, truncated as it was by his illness of which he eventually died in office in March 2019.

The credit goes to Sawant for giving legs to this proposal first mooted by Parrikar, his mentor and predecessor. Barely months after he took over as chief minister, Sawant piloted the Goa Staff Selection Commission Act, 2019, in the State Legislative Assembly during the monsoon session, and got it passed. It soon got the assent of the Governor and became a law, thus making it mandatory for all government recruitment processes to be routed through the SSC.

With the 2022 general elections closing in, large-scale recruitment in the government departments was one of the trump cards the Sawant-led BJP unleashed to re-capture power in the hustings.

The Public Works Department, Goa Medical College, Directorate of Health Services, Revenue Department, the Collectorate and Goa Police were some of the major departments where a large number of vacancies were advertised.

But despite the SSC law already in force and requiring such recruitment processes to be routed through the Commission, Sawant stopped short of implementing its letter and spirit.

To circumvent the law, Sawant amended it during the budget session of January 2021 and introduced an additional clause 8 which read thus: “(8) Notwithstanding anything contained in this section, the Government Departments may, after obtaining prior approval from the Department of Personnel of the Government, conduct examinations for selecting candidates for appointment to sub-ordinate services/posts for a period of two years from the date of commencement of the Goa Staff Selection Commission (Amendment) Act, 2021”.

Thus, the amendment paved the way for the mass recruitments made in the run-up to the 2022 elections to be executed by individual departments, leaving the processes vulnerable to political interference through the executive powers of the individual ministers holding the respective portfolios.

The amendment however was valid for two years and will lapse in January 2023.

Sawant will have to

Hardly had the Chief Minister made the statement on routing all recruitments through the SSC, there were rumblings in the political echelons. While the statement got spontaneous support from the Opposition, a group of ministers was not amused and are believed to have confronted Sawant on the issue.

That cornering jobs for their supporters and constituents is a significant factor in a politician’s handbook was also recently clear when almost every one of the eight MLAs who defected from the Congress to the ruling BJP in mid-September quoted it as the main reason for their crossing over.

Former minister & Nuvem MLA Aleixo Sequeira is on record in the House that a few hundred recruited in the Electricity Department over 10 years ago when he was the Power Minister were still not regularised in government service.

Santa Cruz MLA Rudolf Fernandes, Cumbharjua MLA Rajesh Faldessai and some others from the group of eight MLAs voiced similar concerns and demands at the time of switching sides. They are unlikely to resign to a position of helplessness concerning cornering government jobs for their constituents or supporters and will pile pressure on Sawant.

On Monday, when the cabinet is reportedly scheduled to meet, the issue is poised to dominate the deliberations. Clearly, it will take more than strong political will, if Sawant means what he says and goes on to walk his talk. He will have to rise above.

Chief Minister Pramod Sawant’s decision to fill in 100 per cent of posts in government departments through the Staff Selection Commission (SSC) might have caused turmoil in his cabinet, but this is one issue that garnered him the support of the opposition leaders. The support also comes with a condition to ensure the strategy for transparent recruitment does not turn out to be yet another scam.

“I support this decision but the Commission should not be a rubber stamp. It should be headed by a retired Judge where the entire recruitment system is valued rather than someone who comes with politician affiliation,” Goa Forward Party (GFP) President Vijai Sardesai said.

The Fatorda legislator has accused the BJP of ‘selling jobs’ while inquiries into the allegations have been an eye-wash. The State has been at the receiving end over allegations of large-scale corruption in the recruitment across three departments – Public Works, Health, and Goa Police. With the matter reaching the doors of the judiciary, the red-faced government claimed it scrapped the selection list of junior engineers in PWD and another bunch of vacancies in the Health Services; the Sawant-led cabinet has shied away from scrapping the PSIs posts.

Reacting to rumours of discontent among the ruling leaders particularly, those who defected from the Congress to BJP, Sardesai claimed some councillors in the South municipalities were promised jobs to their family members if they supported the defected leaders. “This is a turf war between the ministers who want the piece of cake. They want to sell jobs,” he alleged.

The BJP leaders are however tight-lipped over speculations that the Chief Minister’s statement could mar the prospects of some ministers, who have been heavily relying on votes through promises of giving government jobs to their voters. Santa Cruz MLA Rudolf Fernandes, who among a few others, claimed he joined the BJP “to get jobs for the youth” remained unavailable for comment.

Leader of Opposition Yuri Alemao claimed that recruitment through SSC is a welcome step by the Chief Minister towards implementing one of the promises from Congress’ Election Manifesto. He however demanded that the government issue a notification immediately to stop direct departmental recruitments.

Beware of these Coin-Collecting Scams!

US Attorney on COVID 19 Scams

The scammer who got away