New Delhi: Campaigning in Gujarat’s key Saurashtra region, Prime Minister Narendra Modi appeared to comment on the Congress party’s ‘Bharat Jodo Yatra’ on Sunday, November 20, adding a reference to Medha Patkar and her activism with the Narmada Bachao Andolan, without naming either party.

As part of campaigns before the Gujarat election, Modi visited Somnath Temple and addressed four rallies in the key Saurashtra region, at Veraval, Dhoraji, Amreli, and Botad. The region is significant as it is a Congress stronghold and Modi’s Bharatiya Janata Party – in power at Gujarat and in the Union government – fared worse than the Congress there in the last assembly election of 2017.

At a poll rally in Dhoraji town in Rajkot district, Modi claimed the Sardar Sarovar Dam over the Narmada river was delayed because many people had tried to stall it.

“The Narmada project was the only solution to quench the thirst of the arid region of Kutch and Kathiyawad (Saurashtra region). You must have seen yesterday how a Congress leader was doing padyatra with a woman, who was an anti-Narmada activist. She and others had stalled the project for three decades by creating legal hurdles,” he said, without naming either Rahul Gandhi – the Congress leader – or Patkar.

The region has a sizeable Patidar and Other Backward Class (OBC) population and has the potential to tilt the power game in favour of or against the ruling BJP in the next month’s elections.

This appeared to explain Modi’s pointed invocation of Gandhi and Patkar.

“When Congress leaders approach you to seek votes, I want you to ask them to explain on what moral ground the opposition party is seeking votes when their leader was in a foot march with a woman who was against the Narmada project. I urge you to ask this question to Congress,” Modi said on Sunday.

Shortly after Modi spoke on Sunday, BJP leaders and supporters tweeted the photograph below and mounted an online campaign against Congress aligning itself with a noted activist. 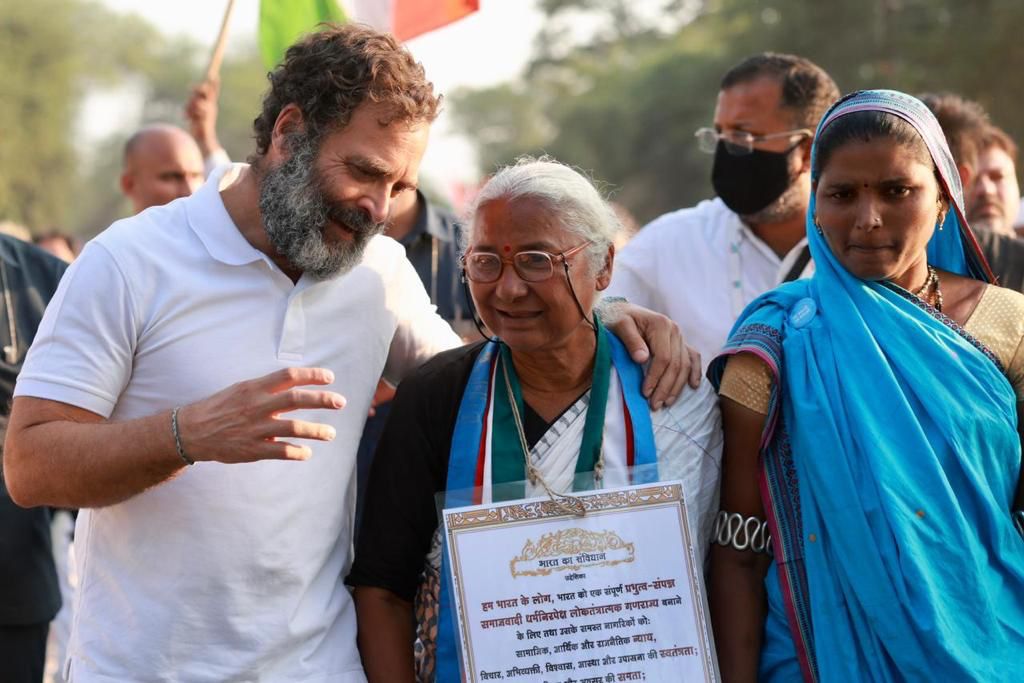 This is not the first time Modi has taken up the Narmada Dam.

While addressing a meeting of state environment ministers on September 23, he said “urban Naxals” had stalled the work of Sardar Sarovar Project.

Canvassing for four BJP candidates from Gir Somnath district on Sunday, Modi claimed that Gujarat had made progress and added that this progress came even though many people “used to look down upon the state in the past for various reasons, such as frequent droughts.”

Addressing another rally in Amreli, the prime minister appealed to the people to not “waste their votes on Congress” as it doesn’t have the roadmap for development. In the previous assembly elections, Congress had won all five assembly segments in Amreli district whereas the BJP drew a blank.

“The BJP government did several things to strengthen Gujarat. Now, it is time to take a giant leap. Congress does not have the capacity to do that. The opposition party can never do anything good for you,” the prime minister said.

Speaking in Botad, the prime minister said the BJP has compelled all other parties in the country to talk about development as the main issue during elections.

“Earlier, allegations about scams used to be the main issue during elections. But, after BJP’s rise in Gujarat, the main issue has become development instead of scams. We compelled all other political parties in the country to talk about development during polls,” he said.

In Singapore, rise in scams, obesity flagged among areas for improvement in report card of public sector’s work

Watch Out For This Tricky New Tactic Called Clone Phishing

US Attorney, Meals on Wheels team up to tackle COVID-19 fraud

DATING SCAMS: How To Steer Clear!

Lyft And Uber Support Scams Are Getting More Creative!

How To Stay Safe From Scams And Fraud – TT Wealth...