New Delhi: With just about a year-and-a-half to go for the general elections, the BJP which had won all five Lok Sabha seats in Uttarakhand in 2019, is now struggling to battle charges of corruption and incompetence levelled against its government in the state by two former chief ministers from its own fold.

Apart from this, a number of recruitment scams and the Ankita Bhandari murder case in which the relative of a party leader is allegedly involved have painted the saffron party in a poor light.

Having changed two chief ministers in quick succession – Trivendra Singh Rawat in March 2021 and Tirath Singh Rawat in July 2021 – BJP heaved a sigh of relief after it managed to win a second term in the state assembly under the leadership of incumbent CM Pushkar Singh Dhami earlier this year.

However, its relief was short-lived. First, a spate of recruitment scams – including those involving appointments to the state assembly, the paper leak case of Uttarakhand Subordinate Services Selection Commission (UKSSSC) – rocked the state.

Then came the murder of Ankita Bhandari, who worked as a receptionist at a resort in Rishikesh. According to the police, the 19-year-old was allegedly killed by the resort owner Pulkit Arya, manager Saurabh Bhaskar and assistant manager Ankit Gupta when she resisted their attempts to force her to offer “extra services” to a VIP guest.

Pulkit is the son of former state minister and BJP leader Vinod Arya, who was expelled by the party following the incident. In damage limitation mode, the Dhami government said it wanted a fair probe into the matter and demolished a part of the Vanatara resort and instituted a Special Investigation Team to probe the murder. But the woman’s parents have charged that the government was trying to “shield the accused”. On Tuesday, they held a protest in Rishikesh demanding that the probe is handed over to the Central Bureau of Investigation. 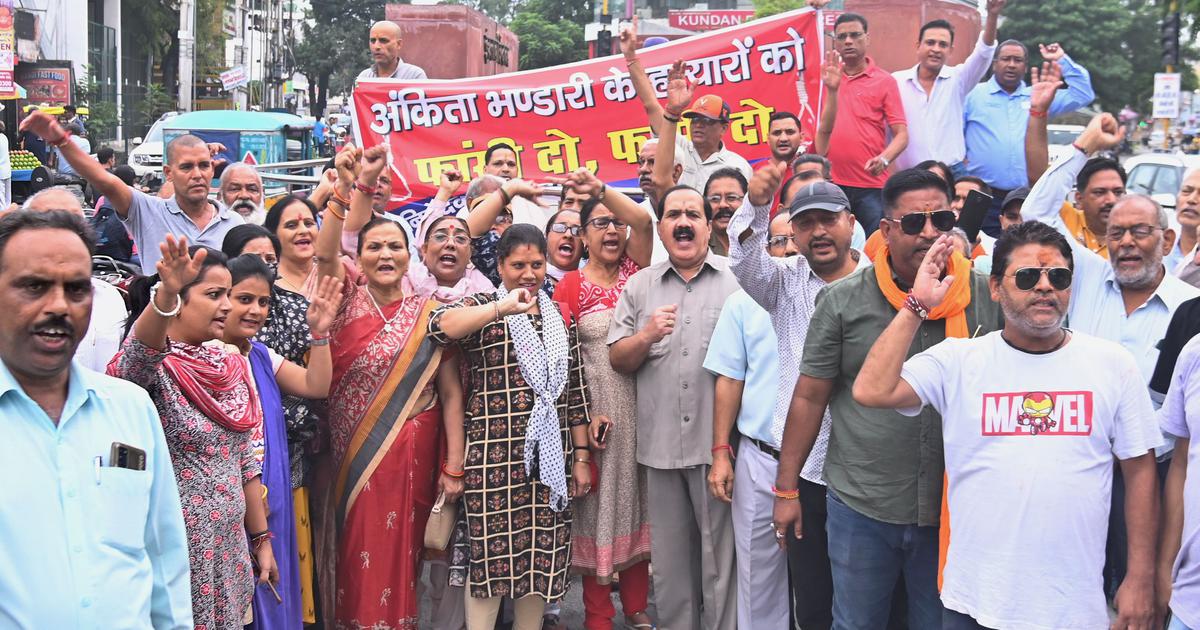 A protest seeking the death penalty for those involved in the killing of Ankita Bhandari in Uttarakhand. Photo: PTI

The BJP government in Uttarakhand has faced a similar crisis of credibility in connection with the investigation into the multiple recruitment scams in the state.

As reported by The Wire earlier, on a petition from the Congress deputy leader in the assembly Bhuwan Chandra Kapri, the Uttarakhand high court had sought a detailed report from the Dhami government on the alleged irregularities in the appointments made by the UKSSSC.

Though the state government then directed the Special Task Force (STF) to probe the charges, Kapri had alleged that the BJP government was only attempting to protect the accused. “While the police are conducting a probe, it is trying to do a leepa-poti (cover-up) as it has found involvement of the people from the government in the scam,” he said.

Former CM says “20% commission” is a norm under BJP

As if these serious allegations were not enough, two former BJP CMs recently accused the government of corruption and spoke about the non-completion of projects in the state, thereby causing further embarrassment to Dhami.

First, it was former CM Tirath Singh Rawat who railed in an undated video released last week that “no one can get anything done in Uttarakhand without paying commission”. Alluding to the carving out of Uttarakhand as a separate state from Uttar Pradesh in 2000, he said: “After separation, it (commission) should have come to nil here but the practice continued and we began with 20%.”

Alleging that “commissonkhori” was rampant in the state, he elaborated, “Though I have been a chief minister and perhaps shouldn’t say this, I have no hesitation in admitting that when we were separated from Uttar Pradesh, up to 20% commission used to be paid there to get public works done”.

Tirath was further quoted by PTI as saying: “It is a mentality. It will go away only when we begin to look upon our state as our own family.”

Trivendra Rawat had spoken out against the “slow pace” of the Dehradun Smart City project, saying it was causing discomfort to party leaders. Speaking at an event, he referred to his over three-year tenure as chief minister and claimed that work on the Smart City project was going very well. “In three years, it had jumped from 99th position to 9th,” he said.

Indicating that the pace of development works has slowed down after he demitted office, Trivendra Rawat added: “Unfortunately, the pace slowed and now everyone has complaints about the way it is going. It is a matter of concern. Smart City project CEOs should not be changed again and again. Every new CEO blames the previous one for whatever goes wrong in the implementation of the project. This is not a solution.”

Following the comments by the two former CMs, the Uttarakhand BJP state president Mahendra Bhatt is learnt to have met BJP national president J.P. Nadda to explain the situation to him. After this, the BJP summoned both the former CMs to Delhi.

Trivendra Rawat met Nadda on November 17 and offered an explanation. He also shared a picture of his meeting with Nadda on social media, even as party sources said the central leadership issued a “stern message” to its leaders in Uttarakhand to refrain from making public statements against the government and to only air their grievances in party forums.

While there is no word yet on how Tirath Rawat explained himself, these incidents have provided enough ammunition to the opposition Congress to attack the BJP.

The state Congress vice-president Suryakant Dhasmana has already stated that the ‘commission-khori’ statement by a former BJP chief minister is an admission that corruption has thrived in the state.

Meanwhile, other party leaders have also started using these statements to win over those who voted for the BJP in the assembly polls earlier this year.

The Congress organised a large meeting in Dehradun on Tuesday, where former cabinet minister and former state Congress president Pritam Singh said that in the past nine months, the Pushkar Singh Dhami government has failed on various counts. The six-time MLA from Chakrata said that despite earning a massive mandate, the state government has failed to protect the lives of people. He claimed that the Ankita Bhandari murder case has exposed the pathetic state of the law and order situation.

Further, Singh also charged that the unemployed youth in the state have been “cheated” of jobs by a series of recruitment scams and paper leaks.

The meeting, a show of strength by the Congress, was also addressed by the leader of opposition in the Uttarakhand assembly Yashpal Arya, former cabinet minister Harak Singh Rawat, the deputy leader of the Congress legislature party Bhuwan Kapdi, and several past and present legislators.

Is It Illegal To Park On Your Lawn In Missouri or Illinois? > KSIS Radio 1050 AM

Criminal gangs have mortgaged or sold at least 30 GTA homes...

SHE IS TO MUCH FOR ME!

Customers Charged Hundreds of Dollars at NJ Gas Station Due to...